Out of the Locker Room

Warning: This article contains some graphic language. Apologies in advance.


I have two sons. They are both in their early teenage years now, so I have decided to start talking with them about rape culture and cutting through the confusing messages prevailing in media and popular culture about how men should behave towards women. As a parent, I have realized that one of the most impactful things I could do is checking what resides in the depths of my children's hearts.

Too many people, most of them guys, quickly dismiss "locker room" talk as meaningless and mere foolishness. Someone I know pointed out that we girls do the same thing when we ogle hot guys who have six packs; that we, too, objectify men. So how about we take a beat and consider for a second the possibility of someone bringing "harmless" words and admiration out of the locker room and into the real world? The ideas that turn into reality come from somewhere, and if that wellspring is filled with poison, then naturally the same stuff is what comes out.

This, to me, is why it was horrifying to read about Eleanor Henry's accidental discovery of a "locker room" discussion about her. Even if those boys didn't act on their wishes, they have already violated that girl's identity in their eyes. They say they don't even really know her, and yet they have already reduced her to a "bike".

In another example, a young female activist in my city somehow ended up in the crosshairs of a supposedly free-thinking group. One of its members posted about her and commented on how her righteous anger is ridiculous. Below is one of the screenshots from the comments thread of that post. If you can't understand Filipino, let me summarize the general message for you: they think her mouth is perfect for a BJ and they would like to tie her up for a gang bang. 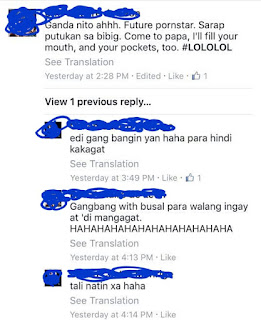 The unfortunate truth is, there will always be people who will keep insisting on how harmless this kind of "macho" talk is. But I'm very sure that many rape victims ended up in those terrible situations because someone began simply with thinking, saying, or wanting to do as they wished.

More than ever, it's time for everyone to speak up and make it clear that this kind of talk is not OK and will never be OK.

In fact, it's ILLEGAL. You can sue for sexual harrassment, unjust vexation, and/or cyberbullying, as relevant to what actually happened.

Please watch the video below. Read more about it at this link on Upworthy.


I truly believe in this:

What you say and do does reflect on who you are and what you believe. At any given point in time, we can always tell ourselves to pause for a moment and think before we act or say anything. Just as the young guys in this screenshot of an excellent chat thread below did. Again, for those who can't understand Filipino, let me sum it up: Almost immediately after one dude starts salivating over a certain girl, the other guys leave the chatroom. The poster had captioned this with "'Pag may tropa kayong manyak sa gc, 'wag n'yo na lang i-entertain." (Translation: "If there's a maniac in your group chat, do not entertain.") 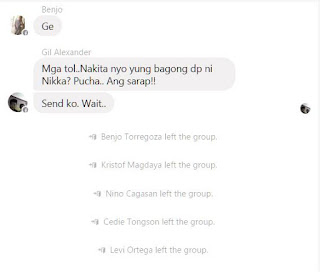 Do not let any unwholesome talk come out of your mouths, but only what is helpful for building others up according to their needs, that it may benefit those who listen. (Ephesians 4:29)

In part 1 of this post, we talked about why we need to control what we post online. Having active online accounts in social media means you have an online presence. While of course it is not who you are in your entirety in real life, what you do share with the world is what you advertise about yourself. Therefore, it is totally within your control to shape your online profile.

If you haven't read part 1, check it out here now before reading on below.

"Using a smartphone without taking the necessary precautions has become riskier than ever," declares Eric Schwartzman, who created Udemy's Mobile Cybersecurity Awareness course. Most of us use our mobile devices nowadays to access our social network via mobile apps, which are generally easy to use. They're sometimes too easy to use, making them also easy to abuse and misuse. We should never dismiss the reality of cybersecurity, especially since protecting ourselves while using online services is actually simple and doesn't take a lot of time to do.

The tips listed below are based largely on the Mobile Cybersecurity Awareness course, and I highly encourage also checking and following these common sense security guidelines.

"Is this gonna be seen on the internet? Like, public? Because I'm wondering if I can say negative things." These were my 15-year old son's concerns as he drafted his very first short article for a family blog project. I was pleasantly amused (and mildly proud) because those are exactly what we should all be thinking about before posting anything on the internet.

FutureLearn's short module on "Managing Your Online Identity" says that if you have active social media accounts, then you have an online presence. In my humble opinion, there are two essential aspects about our online presence that we should be mindful of: Controlling what we post (read on below) and Protecting our online profile (discussed in Part 2 of this article).